Fatima College, Mary Land, Madurai is a Catholic minority Institution, established and run by the Sisters of St. Joseph’s Society of Lyons. Today the sisters are present in 48 countries, responding to the signs of the times and the needs of the people. The Charism of the sisters of St. Joseph of Lyons is unioning Love expressed in greatest charity and Deepest Humility. In India, there is one Province in the South of India and a Region in the North of India. The sisters are involved in Educational, Social Action, Pastoral, Family apostolate ministries empowering the marginalized women and children.

Fatima College, affiliated to Madurai Kamaraj University, was the dream of Sr. Rose Benedicte, the founder of the College, realized 65 years ago. With more than half a century of experience in the field of education, Fatima College has established a reputation for excellence in all aspects of higher education. It has endeared itself to the People of Madurai by imparting value based holistic education to young women with the objective of giving preference to the rural  and economically backward women and first generation learners.

Applications are invited from the Lady Candidates to the Fatima College (Autonomous)Government Aided College,

Qualification:
A 55 % marks in PG Degree with CSIR-NET/NET/SET/SLET or Ph.D
(5 % Relaxation to the OBC/SC/ST/PWD)

How to Apply:
Eligible and Interpreted Candidates may Sent their Resume/Applications along with xerox copies of the relevant certificates send on or before the last date of 02-01-2019 to the Secretary, Fatima College (Autonomous),Old Dindigul Rd, Thathaneri, Madurai, Tamil Nadu 625001. 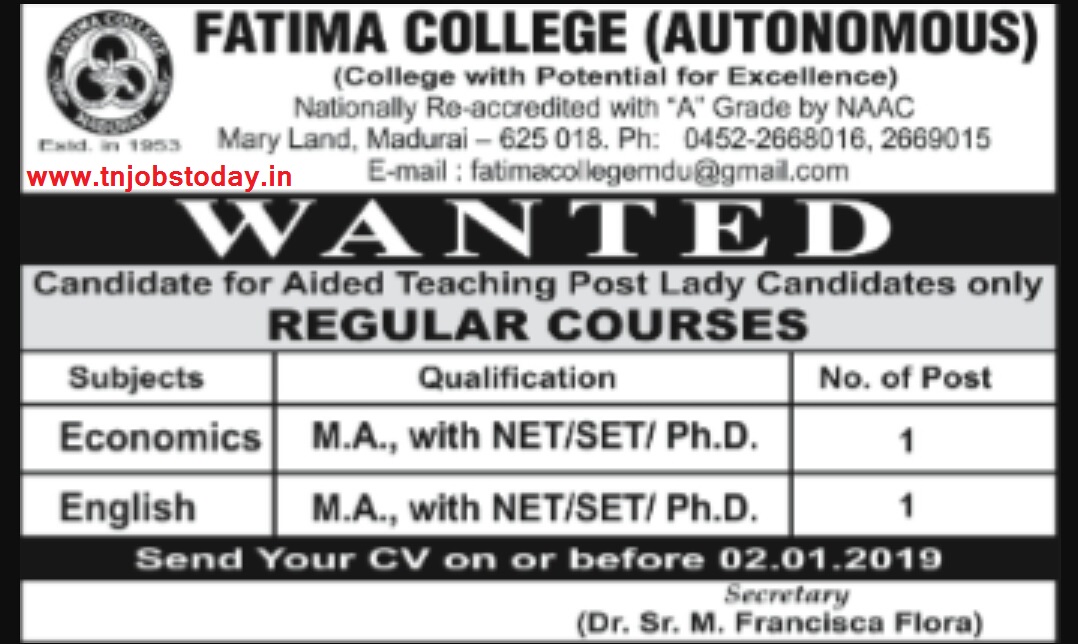