Nadar Saraswathi College of Arts and Science was founded by the Philanthropic Society of Theni Melapettai Hindu Nadargal Uravinmurai with the primary objective of providing higher education for deserving students especially those belonging to the rural sectors. This Educational Agency, Theni Melapettai Hindu Nadargal Uravinmurai was established a century ago with the noble aim of promoting education for the people who were living socially, economically and educationally backward in and around Theni.

Being a philanthropic society, Theni Melapettai Hindu Nadargal Uravinmurai started a primary school about 75 years ago with strength of 72 students. This institution has grown like a banyan tree and now it runs eleven educational institutions. The Uravinmurai through their reputation in the field of education, in and around, Theni, have 25,000 students in the eleven institutions. They impart quality education to the students without any discrimination of caste, creed and religion.  Every year students from these institutions are coming up with flying colors for qualifying themselves either as Doctors or Engineers or Agricultural Scientists or Technocrats. The logical development of these institutions has necessitated the management to start a college at the earliest time in providing facilities for Higher Education to the seeking students.

With the motto of “Service to Humanity”, the management had started ‘Nadar Saraswathi College of Arts and Science’ Dated 19-7-1996 and it flourished in the keen thought of educating rural women. The college was affiliated to Madurai Kamaraj University initially. As per the Government order the College was affiliated to Mother Teresa Women’s University from the academic year 2003-2004. It is the endeavor of the institution to be certified with the prestigious ISO 9001:2008 award since 2006. It is approved Under 2(f) & 12(B) Status of UGC. 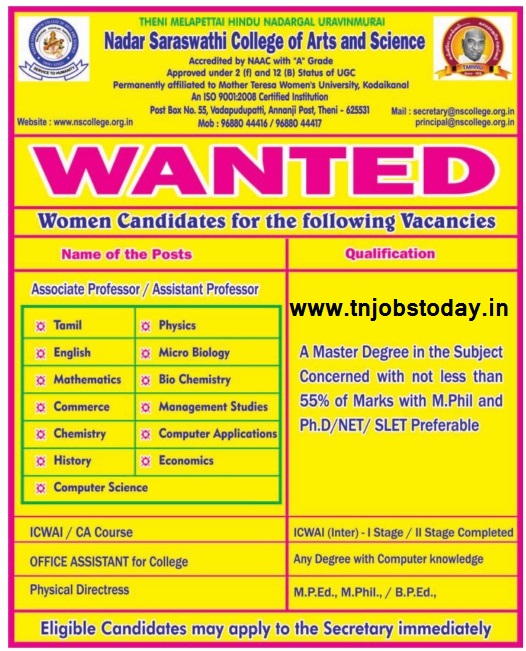 How to Apply:
Interested candidates may apply with good and neat resume with enclose of relevant xerox copies of certificates and send to
The Secretary,
Nadar Saraswathi College of Arts and Science College,
Vadaputhupathi , Theni- 625 531,
Tamilnadu , India,