Mahanama Express to Be Inaugurated by PM Modi 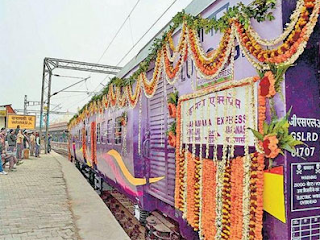 Mahanama Express to Be Inaugurated by PM Modi
www.thequint.com

Prime Minister Narendra Modi is taking a two day trip to Varanasi during his trip he will be inaugurating the Mahamana Express train. The Express will connect Varanasi to Surat and Vadodara.

India’s third Mahamana Express will have the presence of Railways Minister Piyush Goyal at Vadodara and junior railways minister Manoj Sinha at Surat during the inauguration.

The train will take its first journey from Vadodara (Gujarat) to Varanasi (Uttar Pradesh) where the Prime Minister will launch it with the help of a remote control.

The train will travel weekly from Varanasi on Fridays at 6:15 A.M., and from Vadodara every Wednesday.

The Mahamana Express will cover a distance of 1,531 Km between two cities with a travel time of 27 hours and 30 minutes. The train will move at an average speed of 55.7 km per hour.

The Exprss will have its stops at Bharuch and Surat in Gujarat, Amalner and Bhusawal in Maharashtra, Itarsi, Jabalpur, Katni and Satna in Madhya Pradesh and Chheoki in Uttar Pradesh.

The train will have a total of 18 coaches among which one will be AC first class and another AC second class. It will also include eight sleepers, four general, one pantry car and two guard brake vans. This train will not include an AC- 3 tier coach.