Madras Christian College traces its origin to the General Assembly School founded by the Rev. John Anderson, a Missionary from the Church of Scotland on 3rd April 1837. Anderson was a pioneer in introducing English medium education in South India. He was ably assisted by Rev. Johnston, Rev. Braidwood and Margaret Locher Anderson. Rev. William Miller who arrived in 1862 upgraded the school to a college by adding F.A. and B.A., courses in 1865 and 1867. Along with a few other Protestant missions in Madras, Miller transformed the institution and named it ‘Madras Christian College’ on 1st January 1877. Miller’s bold academic vision, supported by the generous contribution from his family members, old students and the Madras Government raised the most impressive array of college buildings and hostels (student homes) opposite the High Court complex. Miller was succeeded by worthy leaders like Professors Skinner, E.M. Macphail, Meston and Hogg.

The rapid expansion of the College and the congested physical space necessitated the shifting of the college from George Town to the 400 acre sylvan Selaiyur forest in Tambaram. The ‘great migration’ took place on 30th January 1937 with a thanksgiving service in which the Governor Lord Erskine participated. Professor Edward Barnes and his wife Alice Barnes, who lived on the campus since 1932, painstakingly shaped and nurtured the campus, by planting hundreds of rare plants, and carving out dusty roads. Swiss Architect Henry Schaetti designed the majestic main buildings. The College hosted the famous International Missionary Conference in 1938. Women students were admitted from 1939.

Dr Alexander Boyd, who was the Principal for 18 long years (1938-’56) further shaped the character and ethos of the College. He was ably assisted by a host of European and Indian faculty. Professor J.R. Macphail was the last of the Scottish Principals to have served the college between 1956 and 1962.

A new era dawned in 1962 (125th Year of MCC) when Dr Chandran Devanesen took over as the first Indian Principal, who further enriched the academic stature of the College and broadened the scope of educational process by taking it to the neighbourhood. Dr Devanesen’s successors have each contributed in their own way to the growth and development of the Institution.

The year 1978 was path-breaking as MCC became one of the earliest colleges to be granted the status of Autonomy. This status enabled the college to introduce new courses, innovative curricular changes in tune with changing times and examination reforms with the focus on learner-centred continuous assessments. Autonomy also enabled the College to introduce diploma and certificate courses through the School of Continuing Education. The College also introduced vocational degree programmes in the Departments of History, Zoology and Commerce in 1994.

The Choice Based Credit System (CBCS) was introduced in 2003 – 2004 enabling the College to provide more choice for the students, especially interdisciplinary options and rationalized the workload of each paper in tune with the credits awarded.

The Halls of residence for men - Selaiyur, St. Thomas’s and Heber and the Martin, Margaret and Barnes for women, contribute to the rich diversity and hustle-bustle of the campus life. The sprawling sports fields, as well as the cultural ambience of the college, provide impetus towards students’ personality and their all-round development.

All key milestones in the history of the college were befittingly celebrated. The 50th year i.e. 1887 witnessed the birth of Philosophy and History Unions, besides the Tamil and Telugu Associations. The centenary of the College celebrated in 1937 was marked with the relocation of the college to the Tambaram campus. In 1962 (125th Year) Dr S. Radhakrishnan, our distinguished alumnus, visited the college and the  MCC  school in his capacity as the Vice- President and the President of India. The 150th year was commemorated in 1987, with the Prime Minister Shri Rajiv Gandhi participating in the main function and declaring open the Miller Memorial Library.  Dr A.P.J. Abdul Kalam, the then President of India lent his gracious presence at the 170th  year celebrations in 2007 and inaugurated the Centre for International Social Work.

100 KVA Solar Power Plant, Commerce Block and IGH Extension wing marked the 175th  year celebrations. In the year 2013, the College was re-accredited by NAAC with A Grade (Highest Grade). In 2016 the College was awarded the status of ‘College with Potential for Excellence’.

Madras  Christian  College has established the ‘MCC Boyd Business School’ in 2016, which aims to offer world-class business education. Academic excellence, spiritual vitality and social relevance have remained the guiding principles of the Institution down the decades.

Name of the Subjects:

Qualification:
A PG Degree with 55% of Marks(SC/ST/OBC/PWD-50%) in Concern Subject and should be passed in SET/SLET/UGC-NET/CSIR-NET/Ph.D,


How to Apply:
The Eligible and interested Candidates may prepare their neat and Clear Resume and enclose with Xerox copies of the relevant qualification, experience and other documents to the Dr.R.W.Alexander Jesudasan, Madras Christian College, Tambaram East, Chennai , Tamil Nadu- 600059 on before 15 days. 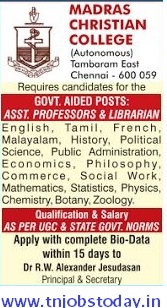