The school was founded by the French Missionaries of our Congregation, Congregation of the Sisters of St.Joseph of Lyons. On their arrival in India in 1906, they realized the need for girls to be educated. So they took it as a challenge encouraged many parents to send their daughters to school and thus played a prominent role in the field of education at various levels. The zealous work of Sr.Rose Benedicta will always be remembered while we think of the school’s history in Madurai.

The presence of St.Joseph’s Matriculation Higher Secondary School along with her sister school, is a wages indeed. It was started in 1959, affiliated to Madras University. In 1966, the school came under the jurisdictions of Madurai Kamaraj University. In 1978 when a separate Board was formed for all Matriculation Schools, this school also came under the Board of Matriculation Schools, Madras. In 1982, this was upgraded to Higher Secondary School. We offer our abundant gratitude to the Divine Father and our energetic founders.

The congregation of the sisters of Lyons has entered into the Bi-centenary year and the institution has completed 50 years of its glorious existence. The continuous commitment of the devoted and dedicated sisters to the humane call of service, especially the upliftment of the girl child has seen the phenomenal rise of the congregation and the institution. The motto of our founder “ALWAYS MORE – ALWAYS BETTER” continues to lead us on. 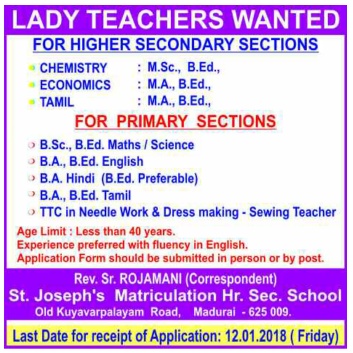