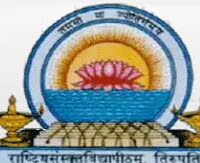 On the recommendations of the Central Sanskrit Commission appointed by the  Government of India during 1950s,  a Central Sanskrit Institute was established at Tirupati in 1961 by the Ministry of Education, Government of India in partial fulfilment of the recommendations, for the preservation and propagation of Traditional Sanskrit  learning combining it with the modern methods of research.  The Government of India constituted an autonomous registered body called ‘Kendriya Sanskrit Vidyapeetha Tirupati Society’ for the administration of the institution.  The foundation stone for the Kendriya Sanskrit Vidyapeetha was laid by the then Vice-President of India , Dr.S.Radhakrishnan on 4th January, 1962. About  forty two acres of land at the foot of the Seven Hills, Tirumala was leased out  by the T.T.D. Trust, then headed by Executive Officer, Dr.C.Anna Rao along with a munificient donation of Rs.10 lacs towards construction of  buildings.

The Vidyapeetha Society has had a galaxy of successive chairmen who were well known public figures – Sri Patanjali Sastry, former Chief Justice of India being the first, followed by Prof.V.Raghavan, a reputed Indologist and Sri M.Ananthasayanam Ayyangar, former Speaker of Lok Sabha. Dr. B.R. Sharma was the Founder, and also acted as the Director from 1962 to 1970. Later the post of Director was changed into that of Principal. Sri Venkata Raghavacharya,  Dr.Mandan Mishra, Dr.R.Karunakaran, Dr. M.D. Balasubramanyam and Prof. N.S. Ramanuja Tatacharya served the institution in various capacities. Kendriya Sanskrit Vidyapeetha came under  the aegis of Rashtriya Sanskrit Sansthan– an autonomous body under the Ministry of Education in April, 1971.  Despite  the  challenges of the modern world, it has grown from strength to strength as a premier Institution for  Sanskrit  learning  and  research  in   India . During   the   Silver Jubilee celebrations in 1987, Sri P.V.Narasimha Rao, the then Union Minister of Human Resource Development, Govt. of India announced the decision of the Government to elevate its status to that of a Deemed University.

Application are invited to the Teaching and Non-Teaching Posts to the Deemed University.

Age : As per UGC Norms

How to Apply:
Interested candidates may be download Advertisement and Application from the official website address as http://rsvidyapeetha.ac.in. than read and fill tha Application carefully, encloses with Relevant documents and send to university on or before 05.01.2018.

5.Application Form for the Post of Assistant Director of Physical Education

6.Application Form for the Post of Finance Officer / Controller of Examinations

7.Prospectus for all Teaching and Non-Teaching Positions