Established the Nobel Prizes "for the Greatest

Since 1901, the Nobel Prize has been honoring men
and women from all corners of the globe for
outstanding achievements in physics, chemistry,
physiology or medicine, literature, and for work in
peace. The foundations for the prize were laid in
1895 when Alfred Nobel wrote his last will, leaving
much of his wealth to the establishment of the
Nobel Prize. But who was Alfred Nobel? Articles,
photographs, a slide show and poetry written by

Nobel himself are presented here to give a glimpse
of a man whose varied interests are reflected in
the prize he established. 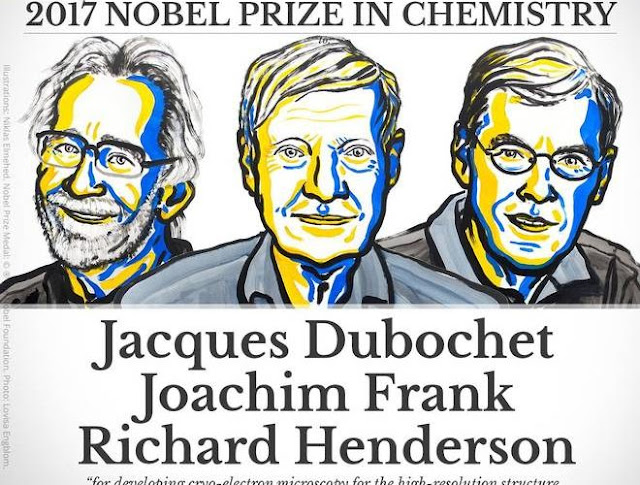 They Captured Life in Atomic Detail
Jacques Dubochet, Joachim Frank and Richard Henderson are awarded the Nobel Prize in Chemistry 2017 for their development of an effective method for generating three-dimensional images of the molecules of life.Using cryo-electron microscopy, researchers can now freeze biomolecules mid-movement and portray them at atomic resolution. This technology has taken biochemistry into a new era.

Nobel Prize in Chemistry 2017
Cool microscope technology revolutionises biochemistry
We may soon have detailed images of life’s complex machineries in atomic resolution. The Nobel Prize in Chemistry 2017 is awarded to Jacques Dubochet, Joachim Frank and Richard Henderson for the development of cryo-electron microscopy, which both simplifies and improves the imaging of biomolecules. This method has moved biochemistry into a new era.

A picture is a key to understanding. Scientific breakthroughs often build upon the successful visualisation of objects invisible to the human eye. However, biochemical maps have long been filled with blank spaces because the available technology has had difficulty generating images of much of life’s molecular machinery.

Cryo-electron microscopy changes all of this. Researchers can now freeze biomolecules mid-movement and visualise processes they have never previously seen, which is decisive for both the basic understanding of life’s chemistry and for the development of pharmaceuticals.

Electron microscopes were long believed to only be suitable for imaging dead matter, because the powerful electron beam destroys biological material. But in 1990, Richard Henderson succeeded in using an electron microscope to generate a three-dimensional image of a protein at atomic resolution. This breakthrough proved the technology’s potential.

Joachim Frank made the technology generally applicable. Between 1975 and 1986 he developed an image processing method in which the electron microscope’s fuzzy twodimensional images are analysed and merged to reveal a sharp three-dimensional structure.

Jacques Dubochet added water to electron microscopy. Liquid water evaporates in the electron microscope’s vacuum, which makes the biomolecules collapse. In the early 1980s, Dubochet succeeded in vitrifying water – he cooled water so rapidly that it solidified in its liquid form around a biological sample, allowing the biomolecules to retain their natural shape even in a vacuum.

Following these discoveries, the electron microscope’s every nut and bolt have been optimised. The desired atomic resolution was reached in 2013, and researchers can now routinely produce three-dimensional structures of biomolecules. In the past few years, scientific literature has been filled with images of everything from proteins that cause antibiotic resistance, to the surface of the Zika virus. Biochemistry is now facing an explosive development and is all set for an exciting future.

Nomination and Selection of Chemistry Laureates
Nomination to the Nobel Prize in Chemistry is by invitation only. The names of the nominees and other information about the nominations cannot be revealed until 50 years later.

Process of Nomination and Selection
The Nobel Committee for Chemistry sends confidential forms to persons who are competent and qualified to nominate.

Qualified Nominators
The right to submit proposals for the award of a Nobel Prize in Chemistry shall, by statute, be enjoyed by:

1. Swedish and foreign members of the Royal Swedish Academy of Sciences;

2. Members of the Nobel Committees for Chemistry and Physics;

3. Nobel Laureates in Chemistry and Physics;

4. Permanent professors in the sciences of Chemistry at the universities and institutes of technology of Sweden, Denmark, Finland, Iceland and Norway, and Karolinska Institutet, Stockholm;

5. Holders of corresponding chairs in at least six universities or university colleges selected by the Academy of Sciences with a view to ensuring the appropriate distribution over the different countries and their centers of learning; and

6. Other scientists from whom the Academy may see fit to invite proposals.
Decisions as to the selection of the teachers and scientists referred to in paragraphs 5 and 6 above shall be taken each year before the end of the month of September.

Selection of Nobel Laureates
The Royal Swedish Academy of Sciences is responsible for the selection of the Nobel Laureates in Chemistry from among the candidates recommended by the Nobel Committee for Chemistry. The Nobel Committee is the working body that screens the nominations and selects the final candidates. It consists of five members, but for many years the Committee has also adjunct members with the same voting rights as members.

Who is eligible for the Nobel Prize in Chemistry?
The candidates eligible for the Chemistry Prize are those nominated by qualified persons who have received an invitation from the Nobel Committee to submit names for consideration. No one can nominate himself or herself.

September-October – Nomination forms are sent out. The Nobel Committee sends out confidential forms to around 3,000 people — selected professors at universities around the world, Nobel Laureates in Physics and Chemistry, and members of the Royal Swedish Academy of Sciences, among others.

February – Deadline for submission of nominations. The completed nomination forms must reach the Nobel Committee no later than 31 January of the following year. The Committee screens the nominations and selects the preliminary candidates. About 250–350 scientists are nominated as several nominators often submit the same name.

March-May – Consultation with experts. The Nobel Committee evaluates preliminary candidates, advised by specially appointed experts for their assessment of the candidates' work.

June-August – Writing of the report. The Nobel Committee puts together a report with recommendations to be submitted to the Academy. The report is signed by all members of the Committee.

Are the nominations made public?
The statutes of the Nobel Foundation restrict disclosure of information about the nominations, whether publicly or privately, for 50 years. The restriction concerns the nominees and nominators, as well as investigations and opinions related to the award of a prize.

Dorothy Crowfoot Hodgkin, Henry Taube, Ernest Rutherford, Ada E. Yonath and Otto Walll Prizes in Chemistry The Nobel Prize in Chemistry has been awarded 109 times to 178 Nobel Laureates between 1901 and 2017.