MINISTRY OF WOMEN AND CHILD DEVELOPMENT,
Government of India,

International Women’s Day is celebrated every year on 8th March. The Ministry of Women & Child Development celebrates this day to acknowledge the achievements
of women for the nation and recognize their contributions to the society.

Therefore, it has been decided by the Ministry to confer 'Nari Shakti Puraskars'every year to individuals and institutions in recognition of their service towards the cause of women empowerment, especially vulnerable and marginalized women.

Stree Shakti Puraskar (Women Power Award) is a series of India's national honours conferred on individual women for their exceptional achievement. The award is given in six categories, by the Ministry of Women and Child Development, Government of India. It recognises the spirit of courage of a woman in difficult circumstances, who has established this spirit of courage in her personal or professional life. The award also recognises the pioneering contribution of an individual in empowering women and raising women's issues.

Instituted in 1991, the award is conferred by the President on the occasion of International Women's Day, 8 March every year at New Delhi. The award carries a cash prize of rupees one lakh (Rs. 100,000) and a certificate.

The award is named after eminent women in Indian history, and is given in the following categories. 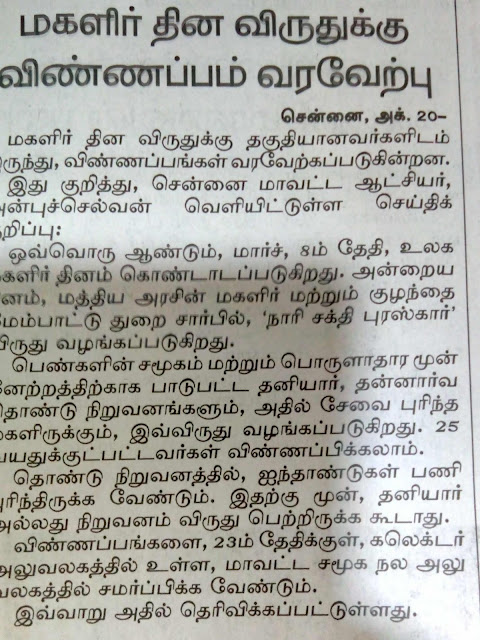