Tamil Nadu Engineering Admission (TNEA) is the process through which more than 1.5 lakhs Engineering Aspirants get themselves enrolled into Engineering Colleges of Tamil Nadu

TNEA 2017 Rank list is generated primarily based on the candidate’s cutoff scores. When there is a conflict two or more student has same cutoff score, a specific methodology is being

used by Anna University. The methodology is briefed at the end of this article. The rank plays vital role with regard to the availability of colleges and courses in the counselling. The top rank

holder gets more chance to select the college and course at his decision.

colleges affiliated to TNEA counselling will be done on the basis of this rank list. The TNEA 2017 counselling process will start from June 27. Earlier the TNEA website crashed amidst the

wait of the students to retrieve the rank lists, but now the official website - tnea.ac.in - is back. TNEA is the process through which more than 1 lakhs engineering aspirants get themselves

TNEA 2017 counselling registration was started on May 1 and May 31 was the last date for Registration and filling of application and Anna University accepted the filled-in online application till June 3.

According to The Hindu newspaper, around 1.25 lakh candidates have applied for admission through single window counselling for engineering courses this year and it is estimated that the  number could go up to 1.3 lakh.

Anna University has released TNEA rank list for the admission of engineering admission counselling in Tamil Nadu state. The candidates who are waiting for rank lists may check it online by following these steps:

Step Three: Enter email, password and code given there on the next page 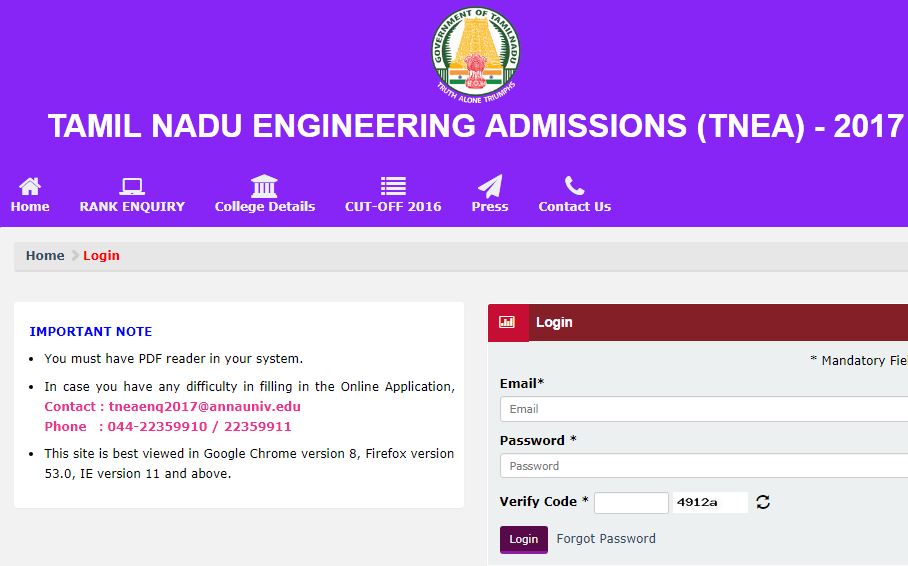 Date of Publication and Link

The rank list will be published on June 22, 2017 officially by Anna University. You shall get your rank by entering your TNEA 2017 application number and Date of birth on TNEA 2017

Rank List. The rank list will be published after the publication of the Random Number. The Random number is essential to sort the rank when there is any ambiguity in cutoff score.

Methodology of Ranking
Cutoff Score
Fourth Subject Score
Date of Birth
Random Number
The high scorer gets first rank. If two or more candidates has same cutoff score then the fourth subject score will be taken for consideration. Even on this situation if they have same score

on it then the elder person will be given high rank. If two or more candidates are born on same day who has cutoff score, fourth subject score then the random number will be used to sort