The Polar Satellite Launch Vehicle, commonly known by its abbreviation PSLV, is an expendable launch system developed and operated by the Indian Space Research Organisation (ISRO). It was developed to allow India to launch its Indian Remote Sensing (IRS) satellites into Sun-synchronous orbits, a service that was, until the advent of the PSLV, commercially  available only from Russia. PSLV can also launch small size satellites into geostationary transfer orbit (GTO).

PSLV was designed and developed in the early 1990s at Vikram Sarabhai Space Centre near Thiruvananthapuram, Kerala. The inertial navigation systems are developed by ISRO Inertial Systems Unit (IISU) at Thiruvananthapuram. The liquid  propulsion stages for the second and fourth stages of PSLV as well as the reaction control systems are developed by the  Liquid Propulsion Systems Centre (LPSC) at Mahendragiri near Tirunelveli, Tamil Nadu. The solid propellant motors are processed at Satish Dhawan Space Centre (SHAR)at Sriharikota, Andhra Pradesh which also carries out launch operations.

The PSLV was first launched on 20 September 1993. The first and second stages performed as expected, but an attitude control problem led to the collision of the second and third stages at separation, and the payload failed to reach orbit.[9] After this initial setback, the PSLV successfully completed its second mission in 1994.[10] The fourth launch of PSLV suffered a partial failure in 1997, leaving its payload in a lower than planned orbit. Since then, the PSLV has launched 34 times with no further failures.

PSLV continues to support Indian and foreign satellite launches especially for low Earth orbit (LEO) satellites. It has undergone several improvements with each subsequent version, especially those involving thrust, efficiency as well as weight. In November 2013, it was used to launch the Mars Orbiter Mission, India's first interplanetary prob

The Indian Space Research Organisation (ISRO) successfully launched 31 satellites — 29 of them belonging to foreign countries on board the PSLV-C38 from the Satish Dhawan Space Centre here on Friday.

The PSLV, in its 40th flight, carried the Cartosat-2 series satellite, the main payload, weighing 712 kg and another Indian satellite, NIUSAT, an Indian university/academic institute satellite from Noorul Islam University, Kanyakumari. Delegates from foreign agencies that were sending their satellites watched from Mission Control as the satellites were placed into orbit.

The PSLV-C38 took off from the first launchpad at 9.29 a.m. The Cartosat-2 series satellite was placed in orbit at 16 minutes after launch and the final satellite was injected into orbit at 23 minutes. The total payload weighed 955 kg at lift-off. The Cartosat satellite launch will provide remote sensing services for about five years.

The Cartosat-2 is a remote sensing satellite, and is the sixth in the series. It was placed in a 505 km polar Sun Synchronous orbit. It will be used for cartographic applications, coastal land use and regulation, road network monitoring, water distribution, creation of land use maps, Land Information Systems (LIS) and Geographical Information System (GIS) applications, ISRO said.

The Cartosat satellite separated 16.43 minutes after launch, as planned, following which the remaining satellites separated over the next seven minutes.

With the launch of the PSLV-C38, B. Jayakumar, Mission Director said, ISRO now had the confidence to put a number of satellites into different orbits, in a single mission. “Initially it [PSLV] was designed to put satellites in sun synchronous orbit… we could establish it could cater to any type of orbit – Geo Synchronous, Sun Synchronous orbit or low inclination orbit, carrying multiple satellites; Everything has been established. I’m sure this will be a major attraction for foreign customers,” Mr. Jayakumar said.

ISRO Chairman A.S. Kiran Kumar said the PSLV was emerging as a credible launch vehicle for anybody across the globe, “because of the  frequency at which the launch is happening and also the access and timeline within which their satellites can be put into orbit.” 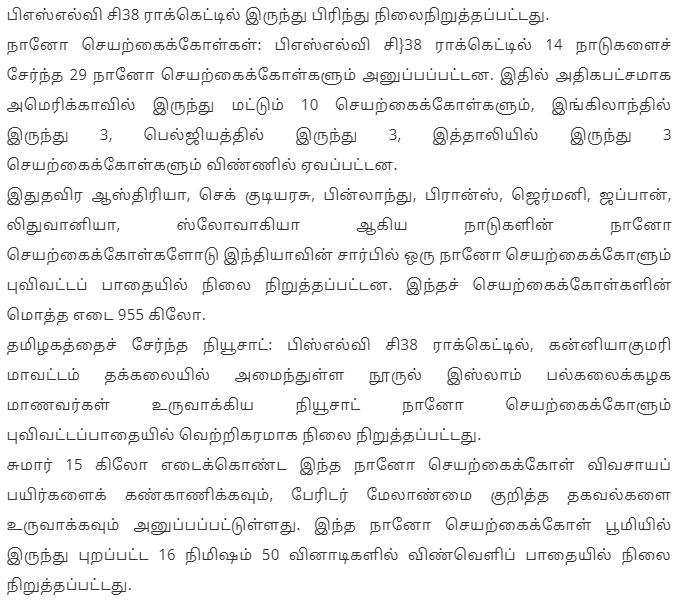 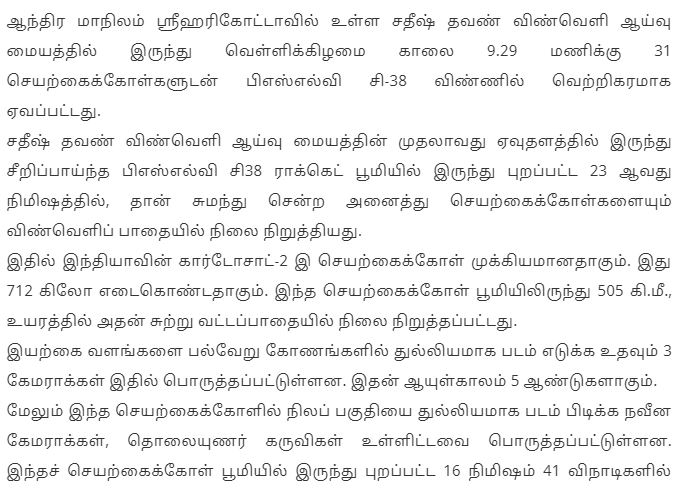 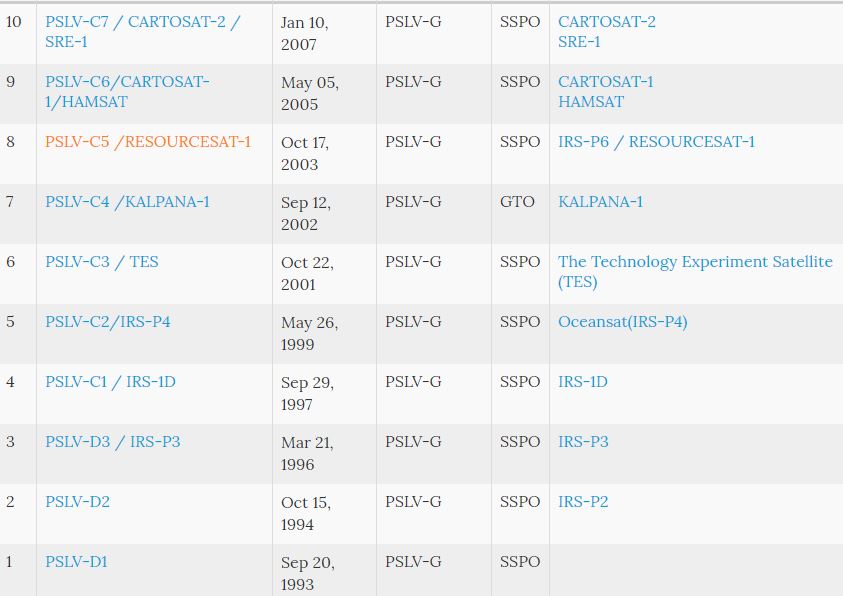 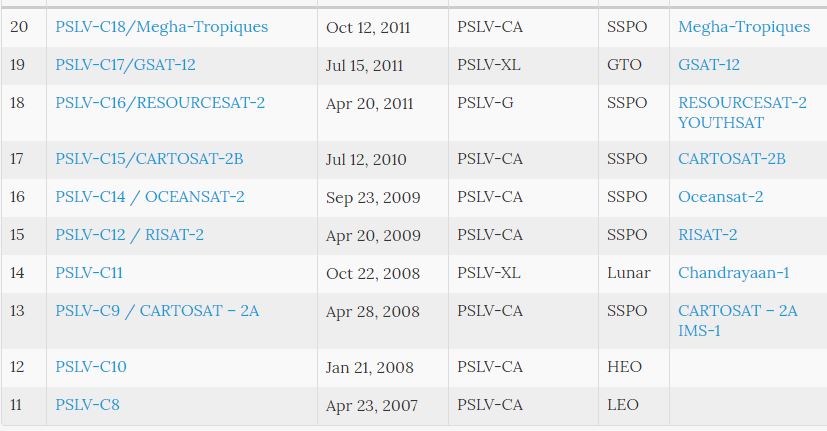 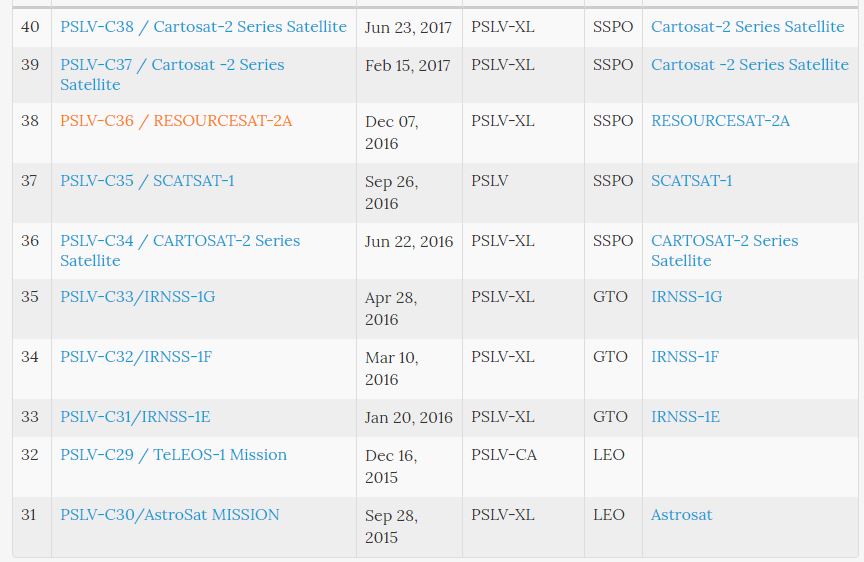